Walter White was one of the most compelling protagonists on television, who viewers struggled with whether to root for or despise. His slow but scary descent from a timid high school chemistry teacher to a drug lord you dare not cross was riveting through every episode of the long-running AMC series. With Walter, it didn’t take more than a few words and a menacing look to have people, even the most hardened criminals, shaking in their boots. At first it was his talent for making the purest blue meth that got the illegal drug trade interested in him. But he quickly flipped the script and his thirst for power took over.

He had pure intentions, but Walter’s sad past combined with his cancer diagnosis led him into territory he never would have ventured into. And, thankfully for viewers, his journey also led to some of the best dialogue ever on TV. Here are 10 of Walt’s most memorable quotes.

“You clearly don’t know who you’re talking to, so let me clue you in. I am not in danger, Skyler. I am the danger. A guy opens his door and gets shot, and you think that of me? No! I am the one who knocks!”

One of the most famous monologues of the series, often quoted as simply “I am the one who knocks” or “I am the danger” this was the first time that Skyler truly got to see what her husband had become. And the terrified look on her face combined with the sheer evil in his villainous eyes said more than even the words could. Walt? Afraid? No, no, no, Skyler. It’s everyone else who should be afraid.

9) Your Plans Are Not Plans

Talk about odd couples: Walter is an intelligent high school chemistry teacher and family man who probably never even got a parking ticket in his life, while Jesse is a drug dealing, drifting teenager with no life plans whatsoever. This line is probably as close to comedic as we’d get from Walter.

“If you don’t know who I am, then maybe your best course would be to tread lightly.”

Walter, er, Heisenberg, isn’t one to be trifled with. And when someone – anyone – decides that they can mess with him, he makes sure they understand it won’t happen. The famous quote only took two words, but the delivery, and the stare that came with it, was enough to have anyone shaking in their boots.

“I have spent my whole life scared, frightened of things that could happen, might happen, might not happen, 50 years I spent like that. Finding myself awake at three in the morning. But you know what? Ever since my diagnosis, I sleep just fine. What I came to realize is that fear, that’s the worst of it. That’s the real enemy. So, get up, get out in the real world and you kick that bastard as hard you can right in the teeth.”

In this deep monologue, Walter, speaking to his brother-in-law Hank, admits that being diagnosed with cancer has led him to forget all of his fears, and just live. Live for the moment and do what needs to be done. Of course what he feels “has to be done” is a far cry from what his by-the-book cop bro-in-law feels. But that’s a whole other story.

Walter did start out with the purest of intentions, looking to leverage his science skills to make a few quick bucks he could leave for his wife and children once cancer took his life.

But in this scene, he finally admits to Skyler that once he started, and the business got going, he realized it was more for him. After years of seething about missing out on millions from his previous company, being backstabbed by his former girlfriend and business partner/friend, and loathing his job as a chemistry teacher, he finally felt like he meant something.

“Jesse, you asked me if I was in the meth business, or the money business… Neither. I’m in the empire business.”

We learn the root of Walter’s quest for power: back in his early days, he sold his stake in Gray Matter Technologies, a company for which he deserved half of the credit, for peanuts. His former partner Elliott Schwartz and the lab assistant, who Walter was dating at the time, got married and went on to make billions from the company.

If that’s not a recipe for jealousy and the growth of a massive chip on one’s shoulder, I don’t know what is. Needless to say, Walter’s desire to earn money to take care of his family grew like a weed into a desire to prove something to himself – even if it was achieved by making ultra-pure blue meth that made him a legend in the drug trade.

Bravely spoken to the unstable and crazed Tuco once he discovered that Walter and Jesse tried to kill him, it’s important to note that this was in Walter’s early days as a drug cooker. He was likely scared for his life as he uttered these words. But they gave Jesse just enough time to smack Tuco in the head with a rock so they could escape and eventually take over the enterprise.

Viewers cringed when they watched Walter witnessing Jane choking on her own vomit from an overdose. He struggled with whether to help or not, but he opted not to, believing she was too much of a distraction for Jesse. When he finally told Jesse the truth, the tension was palpable.

One of the most iconic lines from the series, Walter didn’t need monologues to get his point across. All it took were a few words and a menacing stare. And these words could put the fear into even the most hardened criminals. He’s Heisenberg, and don’t you ever forget it.

“My name is Walter Hartwell White. I live at 308 Negra Aroya Lane, Albuquerque, New Mexico, 87104. To all law enforcement entities, this is not an admission of guilt. I am speaking to my family now. Skyler, you are the love of my life. I hope you know that. Walter Jr., you’re my big man. There are going to be some things that you’ll come to learn about me in the next few days. But just know that no matter how it may look, I only had you in my heart. Goodbye.”

The last words cut like a knife. In a way, Walter is apologizing for hurting his family. But in another warped way, he isn’t admitting any wrongdoing. He’s simply saying that no matter what he did, he loved his family. Maybe so. But Walt got to a point of no return where the danger and thrill of it all took over him. It was just too difficult to resist. Ironically, just like a drug.

Mike Ehrmantraut is not a man of many words. A rogue cop turned hitman, he provides ample threats and questionable morals when it came to Walter White’s coworkers. His quiet reserve makes him all the more intimidating, at least to most people. Walter and Mike didn’t get along too well, possibly owing to the fact... 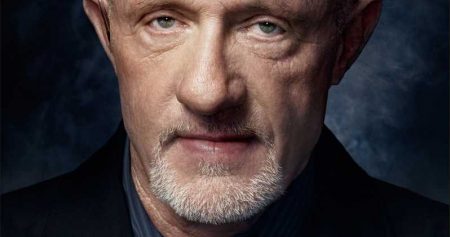 Mike Ehrmantraut is not a man of many words. A rogue cop turned hitman, he provides ample threats and questionable morals when it came to Walter White’s coworkers. His quiet reserve makes him all the more intimidating, at least to most people. Walter and Mike didn’t get along too well,...